Earlier this year, after I gobbled up season 1 of Attack on Titan, read all the available chapters of the currently on-going manga, and listened to the OST repeatedly, I still felt the need to satiate my AoT hunger. Never thinking that I would be the kind of person who ventured into the realm of reading doujinshi (self-published works in Japan, often including fan fiction and manga of pre-existing franchises), I tumbled down that rabbit hole once I stumbled across these covers in my Tumblr feed:

Entranced by the beautiful covers, I read “Dolls” first (warning: NSFW). I tend not to read a lot of fan fiction because I generally find the art crappy and the stories lacking depth, not to mention nothing is canon because it’s not from the original creator. But I admit that I have come to enjoy Inu-moto’s works more than the original AoT series (sorry Isayama). It’s somewhat difficult for me to put into words why I’m so drawn to his/her works (I can’t tell if Inu-moto is male or female, as there are no pictures of him/her online). There seems to be a consistent theme of loneliness, isolation, pain, trauma, concealing feelings, and longing and missing someone. “Debriefing” (also NSFW) is a total heart-breaker. If you read the comments section of the link, you’ll see confessions of readers crying. But even though the stories are sad, even painful and triggering, they all seem to end with the message that everything will be alright, even if it is bittersweet.

I tend to be picky when I purchase comics. I have to not like, but LOVE both the art and the story. If the artwork is beautiful but I’m not crazy about the story, I won’t purchase it, and vice versa. And I have never spent money on fan fiction…until now. I did some more research (ahem, internet stalking, forgive me), found Inumoto’s website, Tumblr, and Twitter, and after much thought for a couple of months, caved in to the temptation to purchase 4 of his/her doujinshis from Japan via the proxy service Treasure-Japan. Comics in Asia are SUPER cheap (in Taiwan, I can purchase one volume manga for $3! Compare that to at least $12 here in the U.S.!), but proxy service commissions and international shipping adds up, totaling to about the same cost to buy 4 volumes of mint edition comics here. My confirmation email said it would take up to 3 weeks to arrive to my address, but it ended up being 1.5 weeks, arriving to my apartment building this past Tuesday. Woohoo!

Of course, every creator loves it when they see that other people are enthusiastic about their work. Even though I speak no Japanese (except for random vocabulary here and there, and kanji, thanks to being bilingual in Chinese), with the help of Google Translate, here’s our brief conversation in Japanese: 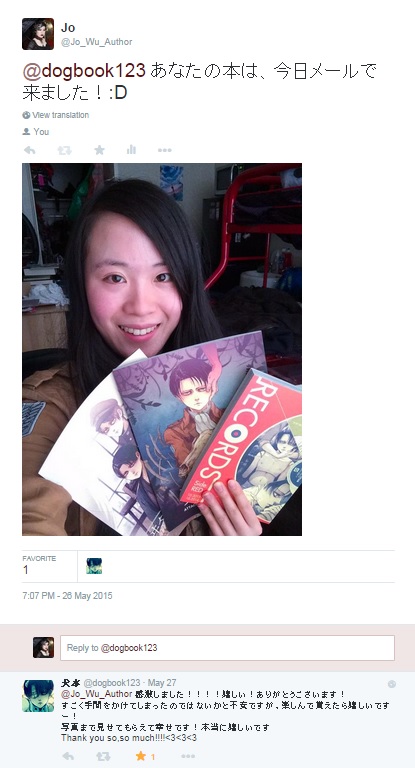 One of my friends, who’s fluent in Japanese, kindly translated his/her Tweet to me:

Well, this post ended up much longer than I had expected. Thanks to this article from BoredPanda, this illustration and definition of the Spanish word “duende” sums up my feelings for Inu-moto’s works. I hope to create works that make others feel the same.